This activity involves listening to songs and finding hidden messages based on the same principle as a modem.

The binary number activity briefly mentions how text could be coded using sound — high and low beeps represent binary digits, which in turn can be decoded to numbers that represent the letters of the alphabet.

There are three sets of songs provided here. The first set is “songs” that decode to English, and the second is a set that decode to Chinese. These songs are simpler to decode; they were recorded by a jazz singer Susan DeJong, and pianist Michael Bell. You can play them in the web browser from the following links, or download zip files of the songs (see the downloads below).

To decode the songs, transcribe a 1 for each high note, and a 0 for each low note. The notes (bits) are in groups of 5, which should be translated to a decimal number. For the English messages, 1 decodes to A, 2 to B, and so on. For Chinese, the numbers 1 to 4 represent tones 1 to 4, then 5 is A, 6 is B, and so on. For more details, see the PDF file in the box on the right.

The major challenge is in the video “Reaching out” (below, and available for download from Vimeo), which contains over 20 hidden binary message in total. The main message can be decoded by noting the pitches of the main tune as for the previous songs (which leads to a reward for diligent students); but there are over 20 messages coded in different parts of the video, including the other instrumental parts, background images, and the dancing.

The names of the first few people to decode various parts of the music video will be posted here; the hidden messages in the song tell you how to get your name here! 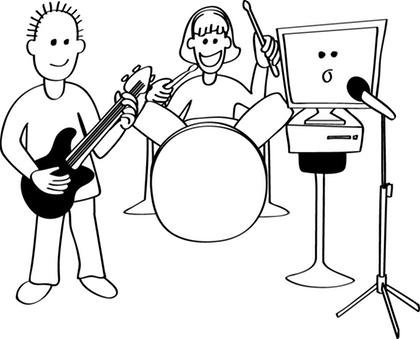 If you want to find out more: