This activity introduces the idea of “divide and conquer” using a fictitious but serious problem – a pair of dirty socks have accidently been wrapped in one of the presents that Santa is about to deliver, and he needs to figure out which one to avoid a child getting a nasty surprise.

You can either play the video (below), or download the PDF of the book (see the PDF files below) to read aloud or give to students.

The solution in the story points out that when there are 1024 boxes to test, instead of having to open all of them until the socks are found, one half can be eliminated at a time, and repeatedly halving the problem very quickly narrows it down to one box (the size of the problem starts at 1024, then with one weighing there are 512 boxes, then 256, 128, 64, 32, 16, 8, 4, 2 and 1.) This idea comes up frequently in the design of fast computer algorithms.

Here are some ideas for follow-up discussion after students have heard the story. Some of these questions overlap, and are just guidelines for discussion.

The remarkably fast algorithm that can deal with very large inputs is very similar to binary search, which can search large lists of sorted values (numbers, words or any information) making the same number of comparisons as the elve’s algorithm. Thus even a billion items can be searched in just 30 comparisons. 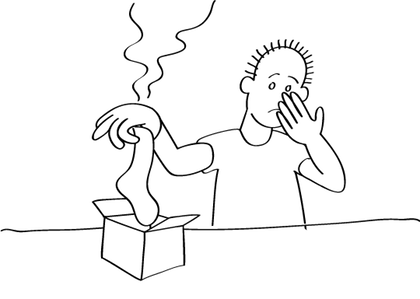